skip to main | skip to sidebar

By VIRGINIA WINDER
MICHAEL FENTON holds a black match-box-sized box and waves it like a sword.
The Inglewood High School teacher is showing how students might play laser tag with it at lunch-time.
Or they could use the “pod”, as he calls it, to measure, well, just about anything.
This wee sensor can gauge light, sound, heart rates, moisture, vibrations and even respiration. It runs on a watch cell battery and collects information in a microchip. It sends the data to a bigger black box, about the size of a block of butter. This is called the “hub”.
The hub feeds the data into a computer, which uses the software Fenton has written to interpret the material. On screen are four different graphs, showing what has been measured.
Fenton says the pod will be able to measure eight separate elements at once and be viewed on screen.

He (left, with student) envisages it being used to monitor an experiment in a school laboratory overnight and the students being able to check progress by logging on to the school’s website.
It could also be used to measure the pH balance of liquid, count cars, activate alarms and even help schoolchildren keep fit via the laser tag.
But can it make a cup of coffee?
Fenton says yes.
The pod can be two-way. It can send out signals and receive them, so could be easily rigged to switch on a coffee machine.
This may sound far-fetched, but the Taranaki scientist has been testing his Real-world Interactive Games and Electronics Link (RIGEL) system in true-life situations.
His lab rats are his students. It’s OK, they don’t get harmed, but they do get to extend their minds, think outside the box and come up with things to measure.
One of his year 13 students, Robert McEwen (17), has been trying it out in his own time.
“He’s bought some of this stuff (equipment) to try this at home,” Fenton says.
Another student, Sam McSweeney (17), has been enjoying calculus because of RIGEL and its inventor. “He puts it into real-life problems – like using a car.”
The pod can be used to measure engine performance, a fact that has revved up the boys in his class.
Fenton hopes it does way more than that. “This truly of national significance,” he says. “It can be used for cross-curriculum learning.”
The Ministry of Education is always talking about this concept, says Fenton, who has taught biology, chemistry, physics, mathematics, computing and electronics to tertiary level as well as at various secondary schools.
So, after two years quietly pottering away, he’s come up with a gizmo that embraces that idea.
“I can imagine that every student in a school could be issued with the device as part of their stationery – RIGEL becomes as essential as having pens or a calculator.”
He says the pods will cost about $10 per student, which is tens if not hundreds of dollars cheaper than any sensor system now on the market.
“They (other systems) are called data loggers, so this is the Kiwi No 8 wire version, but it works pretty well I reckon.”

Posted by Wetawoman writes everything at 10:28 pm

Where science fiction turns from fantasy to fact

Welcome to The Wow! Factor. Every week I will have new tantalising tidbits about science. Log in and enjoy discovering our world along with me.
Cheers,
Virginia 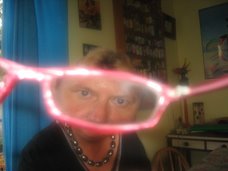 Every week I view the world a little differently. The more I learn about our Earth and beyond, the more I want to learn. That's why I have chosen to zoom in on science breakthroughs, or the facts that make you go "wow" about our world. In truth I am a fledgling in the field of technology, biology, cosmology and all the other "ologies" of science. But I have a thirst to know how things work, why they happen and how they affect us. So, I'm using my 25 years' experience as a journalist to tap into the precious knowledge of our planet's scientists, inventors and inspirational thinkers to deliver you simple science stories. If you have any major discoveries or new concepts to share, please email me at: vwinder@xtra.co.nz

Geek of all trades